Do not re-display this message 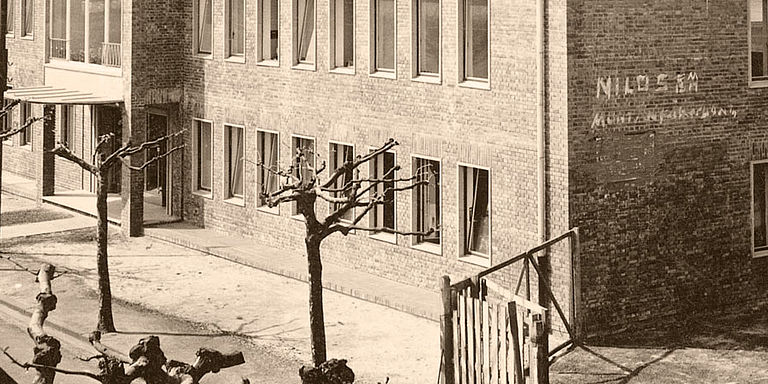 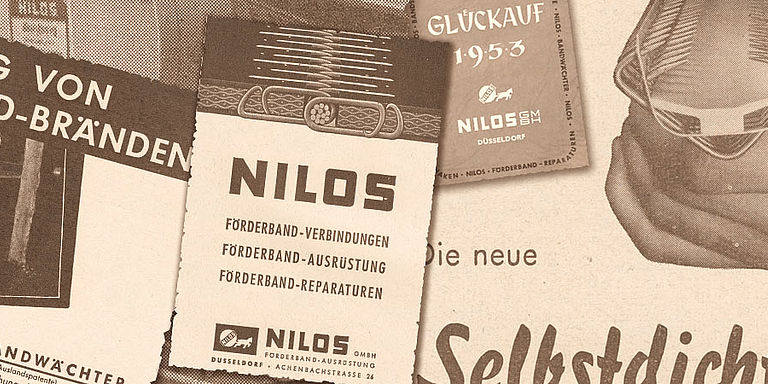 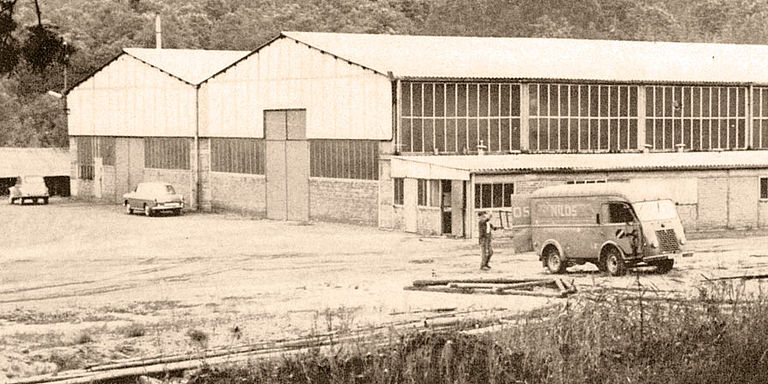 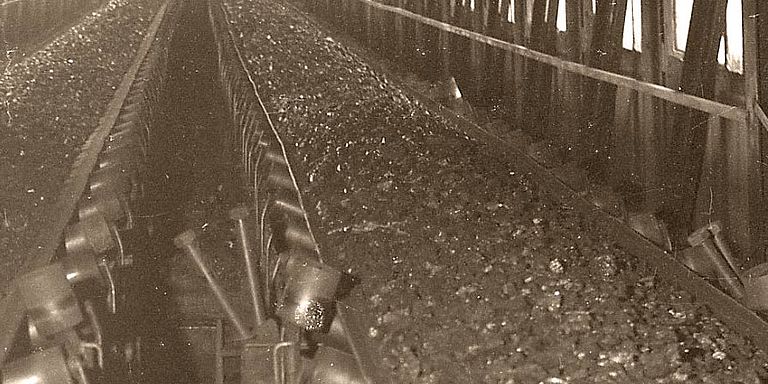 Hans J. Ziller (*15.07.1907 †14.09.1985) goes to school in Leipzig and later studies mechanical engineering and subsequently mining. At that time he familiarises himself with all of the mining methods to be found in Germany.

In 1926 he joins Paul Wever Engineering Office, Agents for Industrial and Drawing Supplies. At that time the first hesitant steps are being taken in mining underground and above ground towards the use of conveyor belts which have to be quickly and reliably endlessly spliced.

A mechanically detachable hook connection is developed and patented worldwide. The first product materialises: a mechanical hook connection. For it a brand name is sought and found: the connection should never work loose. From the German words “nie” and “los” (never and loose) our brand name: NILOS is obtained. The NILOS hook as the first of many subsequent in-house developments and products is born.

With the help of trading companies the new product, together with many new developments, accessories and devices that have been added, is distributed worldwide: THE NILOS CONVEYOR BELT EQUIPMENT In England, the classic mining country, the company’s own production facility was set up as early as 1938: NILOS LTD in Sheffield, with the participation of the company Hayden which had previously taken over distribution in England. Contracts concluded, the operating factory, patents and all rights are lost as a result of the 2nd World War. Manufacturing in Germany was commenced in the following year 1939 in Düsseldorf, completely destroyed by the effects of hostilities, after that first relocated to Wuppertal and subsequently to Lugau in Saxony, Grünbach in the Vogtland and to Chemnitz. It is here that directly after the end of the war, in 1946, the company "Hans Ziller Stahlbau" (Hans Ziller Steel Construction) is founded.

At the end of the war it was possible to save only a few machines. Dealing with the conveyor belt and its endless closure, however, continues to develop dynamically. The idea of hot vulcanising of splices underground and above ground is implemented and for the first time equipment for above-ground use and also firedamp-proof for the underground area is developed and produced. The rapidly growing use of conveyor belts and the post-war material shortages again leads to an idea that is put into practice: the STATIONARY CONVEYOR BELT REPAIR. This method has also survived to the present day and is currently experiencing a renaissance seen against the current background of conservation of resources and recycling. Step by step operation and processes are developed in order to return valuable conveyor belts to the work process again.

By now a virtually incredible quantity and length of very nearly 3 million metres of conveyor belts have been repaired, regenerated and supplied to multiple re-use. The city of Hilden has in the last few decades become the focus of NILOS and the associated sister companies. Here is, among other things, one of the world’s largest stationary repair presses for conveyor belts with a conveyor belt width of up to 3,200 mm. Conveyor belts are the backbone of a belt conveyor unit, individual lengths have to be permanently spliced to large lengths during assembly.

NILOS vulcanizing equipment is made for the splicing and repairing of conveyor belts of all belt widths. The equipment is manufactured in transportable modules which are set up ready for functioning only when they are used. The press consists of heating platens with connection elements and pressing bars. The heating platens are made in an aluminium lightweight type of construction; temperature control takes place automatically or electronically. Cooling possibilities can be provided. For pressure application mechanical or hydraulic pressing bars are available. Special profiles made of special aluminium alloys make a high specific surface pressure possible. The standard system of pressure application was extended in the latest equipment version to liquid surface hydraulic elements, so that now a vulcanizing device is available for every market segment. NILOS today offers the world’s most extensive family of different press types by far and has, within the last few years, on a segment-related basis earned the undisputed position of a world market leader.

The use of textile and steel cord conveyor belts requires care and partial repairs. For this a simple splicing and repair method was found: VULCANIZING AND GLUEING in the cold method. The great demand for raw rubber and the wish for and necessity of independence led to RUBBER PRODUCTION. Together with that, numerous other rubber products were developed and hence the product range was expanded again.

Hans J. Ziller receives high awards. The Technical University in Aachen awards him, in appreciation of his outstanding merits, an honorary doctorate of the Faculty of Mining and Metallurgy.

From the Diesel Medal Trustees in Nuremberg he received, together with Wernher von Braun, the Diesel medal in gold. The Federal Cross of Merit of the Federal Republic of Germany is awarded to him in appreciation of his services for technical achievements and his commitment as the president of the Neanderhöhe Observatory.

The NILOS RING, developed for mining

This ring was initially also only an idea. The axially acting all-metal seal for ball bearings and roller bearings. The area of application is at first in mining again. The ring proves to be outstanding for sealing idlers for conveyor belts. In the following years the NILOS Ring gains considerable market shares in practically all areas of mechanical engineering throughout the world. For every type of ball bearing there is a NILOS Ring available today, in addition to many special shapes. A convincingly simple, but safe and very effective seal for the most difficult areas of use is the NILOS-LSTO ring.

The NILOS ring is today a machine component that has gained worldwide recognition and dissemination. It is produced in the production area of Ziller GmbH & Co. KG, likewise in Hilden, and from here it is distributed.

The company Paul Wever is transformed into HANS ZILLER Kommanditgesellschaft, in which, alongside the senior partner Dr.-Ing. E. h. Hans J. Ziller, Mrs Luise Ziller takes on responsibility as a holder of a general commercial power of attorney and shareholder of several companies of the group. At the same time all of the other members of the family are appointed to be limited partners and after the completion of training must now take up responsible positions in the different companies.

A new management is formed from long-standing employees. The slogan is diversification. New products, new customers for new markets. A change in the existing sales strategy is the automatic result. Participation in trade fairs, marketing and advertising are intensified and now also extended to international markets. NILOS presents its range not only at fairs and exhibitions in Europe, but worldwide.

Our deliveries now reach, besides European countries, also those on the other continents. In the large outcrops of lignite and hard coal NILOS equipment is increasingly used. Our experience in splicing, caring for and repairing large belts, especially steel cord conveyor belts proves extremely valuable.

General overhauling of steel cord belts from Narvik and Tarbela are carried out in the main works in Hilden.

Today many products are to be seen as related to the concept of “environmental protection”. Wear protection made of rubber is supplied in all forms for countless cases of use. In the search for better operating results, for noise and wear reduction, for higher throughput rates in the classification of bulk goods in the non-metallic minerals industry, in the case of coal, ores etc. the following product group is put to use: sieve bottoms made of elastic materials.

Hans J. Ziller dies on 14 September 1985 after a short illness at the age of 78. The workforce mourns their boss. His memory remains for all of those who worked together with him. His three sons and his daughter take over the management of and responsibility for the group of companies. Sales and Administration of NILOS GmbH in Düsseldorf are given up.

In 1988 a concentration at Reisholzstraße in Hilden takes place. The new administrative, development, production and research centre is constructed and occupied.

With this restructuring the stage is set for the demands made on the future.